These sessions are open to all and run by Worcester Futsal club. Simply turn up and play, shin pads and drink essential. 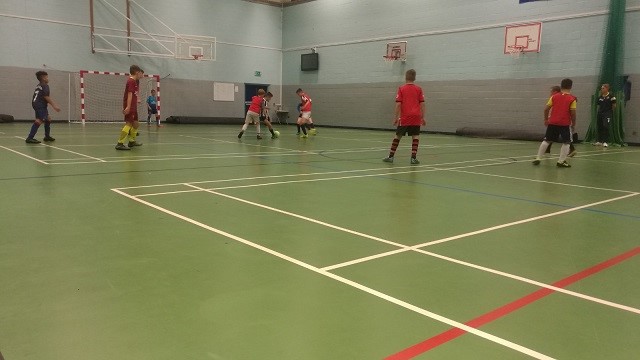 The top 10 benefits to playing futsal are:

Rewards
Futsal rewards the same basic technique, skills, and knowledge of the game as the outdoor game.
Ball touches
In a statistical study comparing Futsal to soccer, players touched the ball 275% more often
Ball control
With limited space, constant opponent pressure, improved ball control technique and skills are required
Speed of play
With limited space, constant opponent pressure and a 4 second restart law players learn to play and think fast
Support play
Without a wall as a crunch players must make supporting runs when team mates have the ball.
Continuity of play
Action is continuous, so players must continue the play instead of stopping and watching.
Knowledge
As the action is nonstop, players are able to develop an improved technical understand of Futsal very quickly.
Framing the Goal
The goal and penalty area are a prefect size for narrowing the angle so teams learn to frame the goal to score.
Learn & Play
The laws of the game of Futsal encourage playing skilfully and punish physical contact fouls.
Have Fun
Players enjoy the challenge of playing a fast paced, fun, skill-oriented game that tests your abilities at whatever level, whilst developing all round individual technique.

Worcestershire FA has been working with Nunnery Wood Colts FC to help shape the future of Futsal in the county.

We would like parents, players and coaches to understand what this format of football is and how Futsal can help players develop as well as the opportunities that are available.

There is also a larger piece of work happening behind the scenes to help increase opportunities with leagues, clubs and schools as well as increasing the availability at indoor facilities.

As this format of football is still in its infancy in this county, more information will be released throughout the year. If you would like more information on Futsal, would like to get involved or give feedback on our coaching sessions at Blesseds Schools.

Please get in touch